“Careening through the universe, your axis on a tilt, you’re guiltless and free,
I hope you take a piece of me with you.” – Third Eye Blind 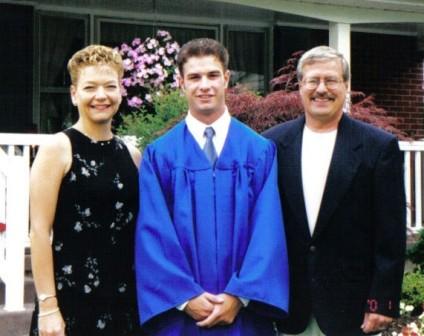 Matt was born on April 21, 1983 in Buffalo, NY to adoring parents Kevin and Kathleen Schnirel. He was the oldest of four children and loving brother to Amanda, Rebecca, and Eric. He grew up in Amherst, NY and attended Willow Ridge Elementary, Sweet Home Middle, and was a 2001 graduate of Sweet Home High School where he played varsity football and baseball. Matt went on to college at the University at Albany, earning his Bachelor of Arts Degree in History and graduating Magna Cum Laude. It was there that he decided to continue his education at the University at Buffalo Law School, where he graduated with his Juris Doctorate in May of 2008.

Matt was a determined young man. Instead of taking time off after college, like many people he knew, he was eager to dive right into law school at UB. That was his personality…when he wanted something, there was nothing that could hold him back. He was ambitious, passionate, and extremely intelligent, all with a caring, fun-loving, and down-to-earth side. He simply enjoyed life…all it had to offer him, and all he contributed back. Matt was very creative and good with words, which is why he developed a knack for writing poetry. In his passing, Matt surprised everyone with his writing ability, except the love of his life, Lauren Schilling, who knew this side of him.

Music and writing went hand-in-hand with Matt; where one began the other left off. From a young age, Matt was drawn towards lyrics and always felt the need to jot something down on paper. He wrote many of his poems in lyrical format. When Matt discovered his favorite band, Third Eye Blind, he proceeded to call himself Jenkins, after the lead singer, and his friend Kyle Christopher was Cadogan, after the former guitarist. Matt had notebooks full of Third Eye Blind lyrics and his own interpretations of them. Not long after Third Eye Blind, Matt found himself wrapped up in the Counting Crows. The lead singer, Adam Duritz, was similar in Matt’s style of writing and emotion. Matt grew quite a collection of Counting Crows shows and unreleased material, and he went to endless concerts of his favorite bands. He loved the emotion that a song brought with it, and was really drawn to what the song was truly about (see poem titled “Singer”). 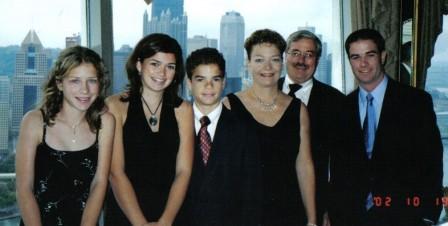 Matt could tell a story with the best of them, and cherished spending time with his family and friends laughing and making long-lasting memories. Along with his friend Brian Wisniewski, Matt started writing the beginning stages of a comedy show he wanted to pitch called Mr. Professional. He was extremely witty and a great story teller, and even believed he could put on a comedy act of his own. Whenever Matt was around, you were sure to have a smile on your face. Laughter was something he got great pleasure from, and he did it on a daily basis.

Besides his family, friends, and Lauren, the other great loves in Matt’s life were history, sports, and beer. Matt always had a thirst for knowledge and soaked up as much as he could anywhere he went. He was especially drawn to downtown Buffalo and all of its history. The architecture fascinated him, and he enjoyed finding out facts about the different buildings and marveling at their beauty. He was also very interested in the Buffalo Central Terminal Restoration Project. Matt loved having conversations with his Father and Grandfather about such topics. 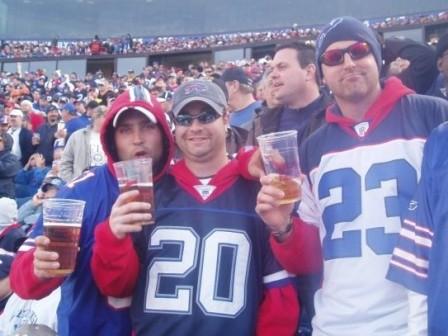 When you think of the Buffalo Bills, Buffalo Sabres, or Atlanta Braves, you think of Matt. He was a sports enthusiast and spent many hours wrapped up in his draft picks, tailgating at Bills games, or listening to AM550 sports talk radio. He was a Bills season ticket holder, along with his friends Mike Ciminelli, Jeff Parker, and Mike Constantino, and Sunday football was something he always looked forward to each week. The outcome of the game would determine his mood for the rest of the day, or even the rest of the week for that matter! When the Bills season ended, Matt counted the days until the draft, and then until the following pre-season began. 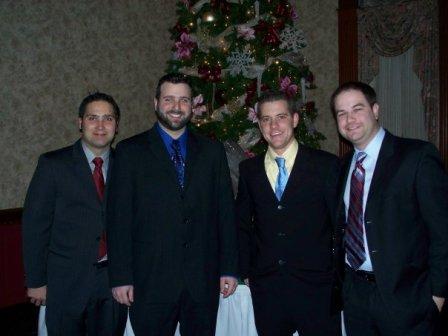 Matt truly enjoyed sitting back, putting his feet up, and relaxing with a mug full of Samuel Adams (Sammy A. to Matt). He spent many Saturdays with his friends and an IPA at the Southern Tier Brewery near Jamestown. Matt loved trying new beers at different restaurants and bars, and had his own mug at The Buffalo Brew Pub and Uno Chicago Grill. He came a long way in the beer drinking world….his favorites went from Blue Light, to Rolling Rock, to Heineken, to Saranac, to Sierra Nevada, to Sam Adams, to IPA’s, and finally to Unearthly. And let us not forget…a shot of Patron was a sure winner with Matt! He had even been advising one of his friends, Justin Schultz, on opening his own bar and restaurant in the very near future. Not surprisingly, Matt’s first three law cases he was working on himself all involved bar-related incidents. All of Matt’s friends would turn to him for legal advice, and Matt always had a way of telling them how they could get “out” of the crazy situations they always seemed to get themselves into.

What all of this shows you, is that when Matt got involved with something it was never just on the surface; he was always in deep, both with his mind and heart. That’s not to say he wasn’t cautious, because he was very sensible and thought things through. He always gave everything he cared about his all, whether it be his career, girlfriend, family, friends, or the simpler things in life…with Matt, there was no half-way. 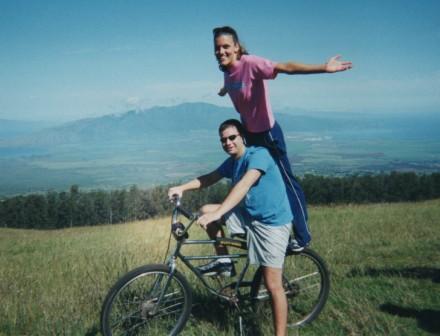 Matt also had a great love for the summertime and the beach. Many years of his childhood summers were spent at Sauble Beach on Lake Huron. He always considered Sauble very close to his heart, and Matt was looking forward to going back there to rediscover his youth during the summer of 2009; unfortunately he never got that chance. Along with Sauble, Matt spent a lot of time at his Grandparents cottage on Waverly Beach in Canada. He even went as far as to rename his Grandparents, Grandma and Grandpa Beach. Matt also went to Mexico for many years with his family and close friends, and he had endless stories and memories to share from those experiences.

Naturally, when it was time to start working Matt turned to lifeguarding. He spent seven memorable summers as a lifeguard at Greenwood Pool in Ransom Oaks, and was considered by many to be a hero there (see “Ariticles” tab). He cherished his time interacting with the community, watching over the kids, and enjoying the summer sun. Through working at the pool, Matt met Lauren and they instantly clicked. They have shared the past seven wonderful years together, along with their beloved dog Lincoln. They purchased their first home on April 24, 2009, which they both found perfect for them.

On April 28, 2009, Matt traveled to Cleveland, Ohio in the late morning aboard Senior Partner, Mike Doran’s, Cirrus SR22 private aircraft like they had done numerous times before. They had many clients in the Cleveland area and they were preparing for a trial to begin the following week. Before leaving from Cuyahoga County Airports’ Cleveland Jet Center, they called home and said they had settled their case; Mike told his law partner, Chris Murphy, what an outstanding job Matt had done working with their client. A manager at The Cleveland Jet Center said that as Matt and Mike walked out to the runway where their plane was, they were both laughing and had smiles on their faces. Only four minutes after takeoff their single engine plane crashed in the parking lot of St. Bartholomew’s Church in the suburb of Mayfield Village, Ohio.

Matt was a beloved son, brother, grandson, nephew, cousin, friend, and boyfriend. Somehow we have to carry on and embrace all that he taught us in his short time here. He laid out a path so that we can follow in his footsteps. Matt never backed down from anything. He taught us that with a little hard work, dedication, and determination you can accomplish anything you set your mind to. He brought people together, and that is really what life is all about…enjoying each others company. Matt loved to make new friends, but always cherished spending time with old ones. He also truly appreciated all the little things in life…having a good conversation, helping someone in need, the first sip of a good beer, laughing, and seeing the joy on his dog’s face when he walked in the door. We should notice more of those simple things all around us in our everday life and be thankful for them.

Matt tried to learn something new every single day. Not only did he learn from textbooks, but he learned from others. He had the perfect mix of intelligence, wit, and common sense. He knew that not everything could be learned in school, although he read all he could and studied hard. Matt knew the most important lessons were learned from others. We should take the time to listen, and to try something new.

Matt was never one to wait around. If it’s feesable, or even if it’s not, find a way to make it happen. Yet again, Matt showed us how to balance life; he lived in the moment, planned ahead for the future, and kept his past close to his heart. Matt has affected each of our lives in a profound way. Lets all take the time to sit back and think of what he left us; the many life lessons we will continue to live by and look back on. We will take his love and carry it with us every day of our lives, knowing that he cares about each and every one of us. We will never forget Matt, and we will make sure that his legacy lives on through his foundation at UB Law School.

A note from Lauren

I would like to express that making this website for Matt and his foundation has been a great honor. Thank you from the bottom of my heart to everyone who contributed their efforts in making the website come to life. I feel that it will help bring people together to share their stories about Matt, and hopefully to see what an extraordinary individual he was and will forever remain.  I will be forever grateful that Matt was a part of my life. 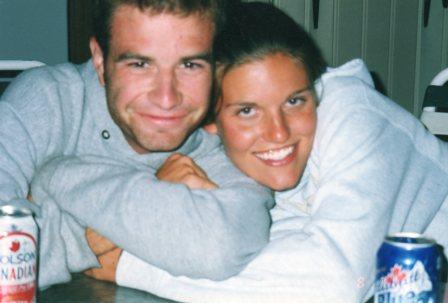 Here in My Heart

I will always love you Matt
Love, Laur

“If ever there is a tomorrow we’re not together…there is something you must always remember. You are braver than you believe, stronger than you seem, and smarter than you think. But the most important thing is, even if we’re apart…I’ll always be with you.”